The Gold Card office invited writer Michelle Kuo to speak to scholar Sana Hashmi, Ph.D., a Gold Card holder, who is widely known in Taiwan for her grace and warmth.

Sana Hashmi first came to Taiwan in 2020, intending to stay for eleven months. But within months she saw the potential in Taiwan and sought to find a way to stay longer. Her colleagues encouraged her to apply for a Gold Card, and she was delighted to receive it.

In this interview, Sana talks about why Indian scholars, educators, journalists, and professionals should consider coming to Taiwan. In particular, she observes, there are few scholars in India with knowledge of Taiwan. Yet living here has proved crucial to her scholarly work, Sana says. It has given her a richer and more dynamic understanding of international relations. While studies of India-Taiwan relations tend to focus almost exclusively on the security domain, living in Taiwan has equipped her with an interdisciplinary perspective that integrates culture, experiences from daily life, and social relations.

Although being a de facto ambassador can be a lot of pressure—Sana says she’s often the only Indian person in the room—she has found a home away from home here. “Taiwan has a welcoming heart,” she says. In this interview, we ask her about what she wishes Taiwanese people would understand about India and how Taiwan can improve outreach to India. In turn, Sana shares her hopes for Taiwan-India relations, gives advice to Taiwanese people seeking international visibility, and describes a close-knit Indian community here in Taiwan. “Mutual knowledge is a work in progress,” she says. “I wish to see more exchanges between Indians and Taiwanese people.”

Sana is currently the Postdoctoral Fellow at Taiwan-Asia Exchange Foundation. She has been working with the Foundation since March 2021. She is an affiliated scholar with the Research Institute for Indo-Pacific Affairs (RIIPA). Her primary research focuses on Taiwan’s foreign relations, China’s foreign policy, Taiwan’s New Southbound Policy, Taiwan-India relations, China’s territorial disputes, Indo-Pacific, and Asian security. She was Taiwan’s Ministry of Foreign Affairs Fellow at the Institute of International Relations, National Chengchi University in 2020. She is a former Consultant in the Ministry of External Affairs (MEA), Government of India, where she worked on the Southeast Asian region and the Indo-Pacific with a focus on China from 2016-19. In 2017, she was named United Kingdom’s next-gen foreign and security policy scholar.

She holds MPhil and Ph.D. from Jawaharlal Nehru University, New Delhi. She has published several book chapters, policy papers, articles in journals, magazines, web portals, and newspaper articles. She is the author of the book, China’s Approach towards Territorial Disputes: Lessons and Prospects (New Delhi: Knowledge World, 2016). She is currently working on a book project on Situating India in Taiwan’s New Southbound Policy.

What brought you to Taiwan?

I came to Taiwan as a Ministry of Foreign Affairs Fellow at the National Chengchi University’s Institute of International Relations in February 2020. When I first I came here, I thought I would only be here for eleven months and that I would go back to India once my fellowship ended. However, it only took me a few months to realize that there is so much potential in Taiwan as well as in Taiwan-India relations. Taiwan is such a beautiful country that has such fine and hospitable people. I wish more people from my country knew about Taiwan more. To make fellow Indians aware about Taiwan and to share my perspective on the country, I started using my social media accounts, and the reception I received from Indians was overwhelming.

I think that in part motivated me to extend my stay. I also received so much support from my colleagues and friends here. After completing my MOFA fellowship in 2020, I started a visiting fellowship at the Taiwan-Asia Exchange Foundation. Applying for fresh resident visa every time was cumbersome and bureaucratic, making it difficult for me to focus on my work. So, my friends and colleagues encouraged me to apply for the Gold Card visa. Being on the Gold Card visa has allowed me to concentrate on work.

Your work forges a relationship between India and Taiwan. If you were going to pitch Taiwan to Indian scholars, journalists, educators, and others why they should come, what would you say?

Right now, almost everyone in India who studies China wants to go to China for scholarship or fellowship. Very few scholars in India have written on Taiwan, much less visited it. Whenever I am in a conference room in Taiwan, I look around and see that I’m the only Indian in the room. I hope more Indian scholars and journalists visit Taiwan and view Taiwan on its own merit. As the pandemic is ending, I am beginning to see the interest of more Indian scholars and journalists in Taiwan.

With the geopolitical changes that are unfolding, India and Taiwan are the two countries are being discussed in all the conferences on the Indo-Pacific. Right now, India-Taiwan relations are primarily discussed through the lens of China and the One China policy. It is important to look at Taiwan beyond China. In Taiwan, I understood the significance of the interdisciplinary approach to International Relations. It is vital to study Taiwan as well as China through an interdisciplinary approach. I realized how crucial it is to focus on people, culture, and aspects of social relations that go beyond the security domain. My stay in Taiwan and interactions with people from different walks of life here have evolved my understanding on China and Taiwan. I have gained deeper insights on China as well.

Even today, there is not a lot of appetite to pursue Taiwan studies among Indians. What hinders some Indian scholars is the fear of being on the radar of Chinese officials and not being able to go back to China. So, when I started working on Taiwan, I tried to write more on Taiwan’s external engagement. I thought to myself: If I really want to make people aware of Taiwan, I have to write more about Taiwan and its relations with the outside world. I believed being an Indian scholar in Taiwan, I was able to provide a distinct perspective on Taiwan. I started writing on issues that were beyond my comfort zone such as diaspora and cultural ties. Several have shown concern that I am limiting my options by being vocal or writing on Taiwan. In the past three years, interest in Taiwan is growing at the global level including India. I get several requests to write on Taiwan regularly. So, there are opportunities for people to grow their career here.

The climate is so politically charged that you can just have a simple conversation with anyone in a temple or on a street in a restaurant. You can discover how Taiwan and China perceive one another by being here. I think this is something that Indian scholars or even the Indian government to some extent hasn’t been able to appreciate.

If you had to give any advice to Taiwanese people seeking international solidarity and visibility, what would you say to them?

Taiwan needs to understand India better and work on its outreach to the country. It is mostly limited to the West as of now. Indo-Pacific studies are incomplete without India, and the world is looking to it. I don’t see a reason why Taiwan should not actively pursue India.

Taiwan introduced the New Southbound Policy to streamline its policy in the Indo-Pacific region. The policy is relatively newer. As Taiwan is taking a stock of the policy, it is crucial for it to have a robust India policy within the wider New Southbound Policy. There is a need for Taiwan to balance its outreach to the West and to the countries in the region. It has to diversify its relationships. With India, it is, of course, a two-way process. India also has to shed its hesitancy and embrace engagement with Taiwan.

What do you wish Taiwanese people would understand more about India?

Taiwanese people have limited exposure to India. They tend to think it’s just about curries and food. There is little awareness about the diversity in India. But I understand that mutual knowledge is a work in progress, and I think it’s starting to change. Being a strong advocate of Taiwan-India relations, I wish to see more exchanges between Indians and Taiwanese people. 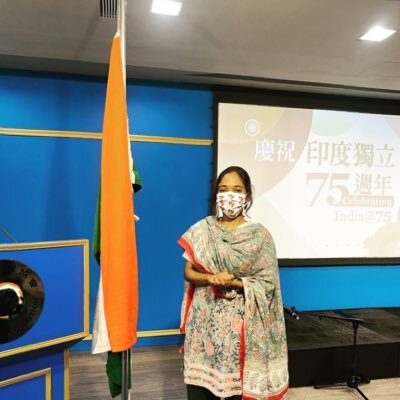 You’ve been a graceful source of cultural knowledge here, though I know it must be a lot of pressure to be a de facto ambassador! You’ve written about the Indian diaspora in Taiwan. I wonder if you want to talk a little bit about what those communities are like here. Anything that strikes you?

We have a small community of approximately 5,000 people. The number is small, especially when you compare it to, say, the Indian population in Singapore and other countries in Southeast Asia. Despite this low number, it is an affluent and close-knit community. There is wonderful effort that has gone into organizing and community-building in spite of the lack of diplomatic relations. At some point I would love to document the people of the Indian community here—how they came to Taiwan and their stories. I cherish the Indian community in Taiwan. And Taiwan has embraced us and given us a home away from home.

I believe that if there are more exchanges between Indians and Taiwanese, these two governments will feel more compelled to talk to each other. If you have more Indians in Taiwan, then the government will be compelled to support peace and stability in the Taiwan Strait. This can also raise the stakes in the bilateral relationship as well.

I love your piece about the diaspora and learned so much from it. It gave such a clear history of the waves of Indian immigrants here. Have you felt any discrimination here?

I feel welcomed in Taiwan, both on the personal and professional levels. Taiwan is a very open country. When I go to a restaurant or coffee shop, people often ask me if I am from India and want to strike a conversation about my country. For those who have gone to India, they only have good things to say! Indian community, in general, is well-respected here. 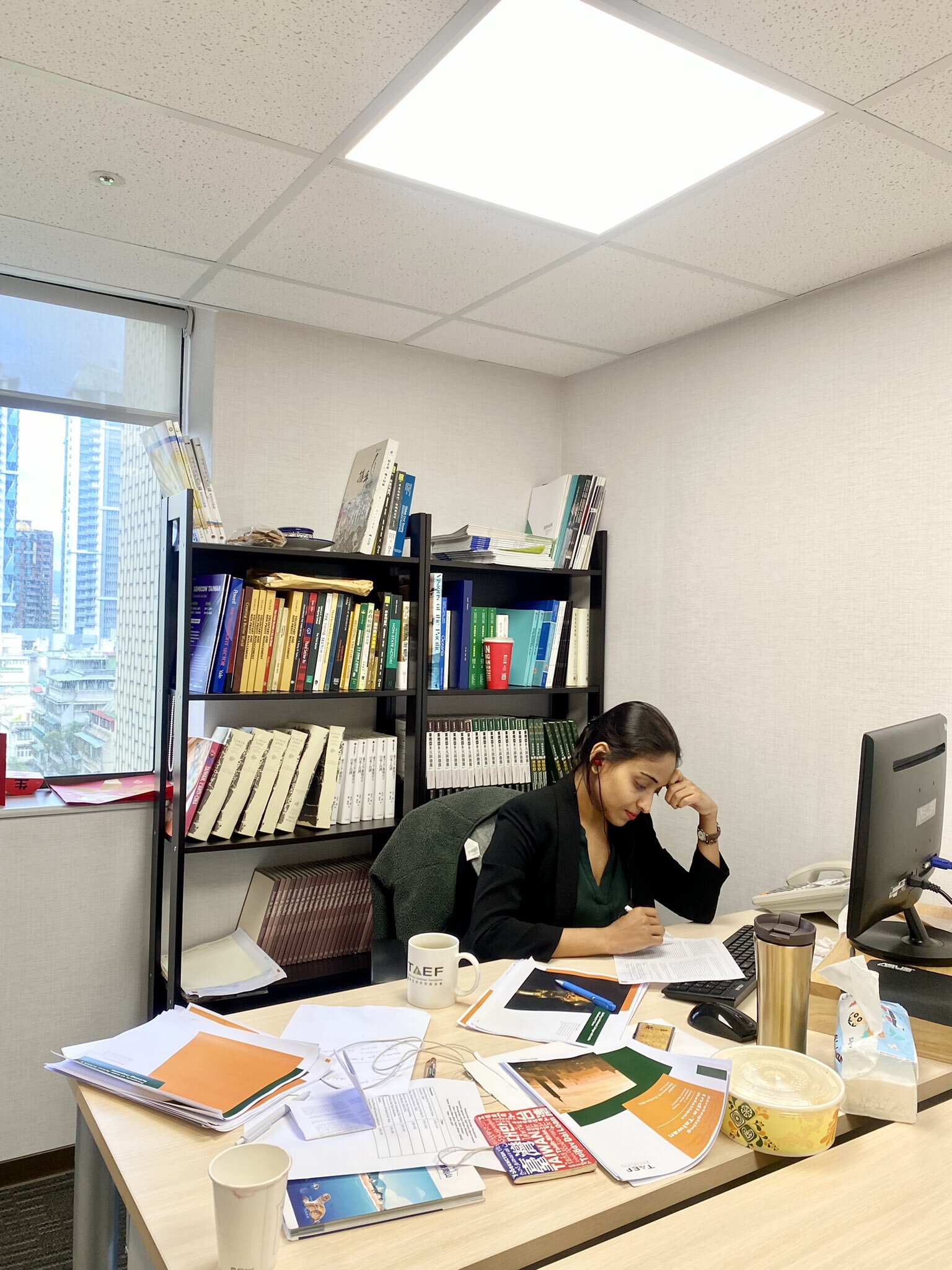 Taiwan has a welcoming heart. This is an island and country with a heart. When I decided to make Taiwan my home, it felt right and natural. I’m not here just for Taiwan or just for India—I’m here because I know I have chosen the right cause. And for all the support I’ve received, I just want to say thank you, Taiwan!